Morphologist is the name for the toolbox including T1 anatomical MRI processing, cortical sulci extraction and identification, and morphometric applications.

Morphologist has been released for many years as a toolbox for the BrainVISA software. It now has a simplified user interface: Morphologist-UI, which may be used in a much user-friendly way in many cases. 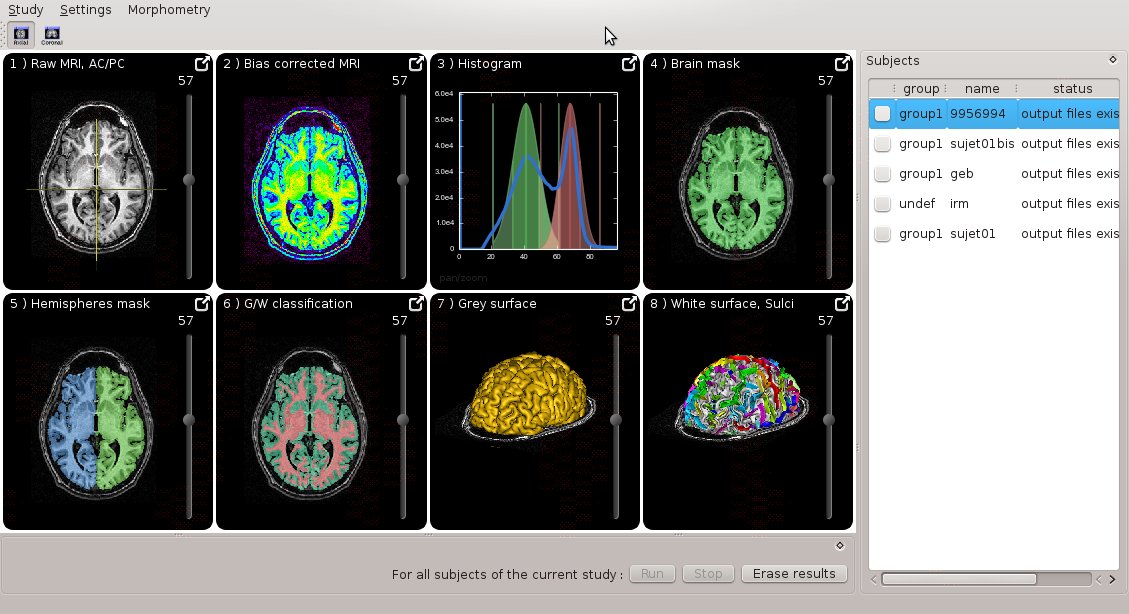 Before processing T1-weighted data, it is recommended to import it in a BrainVISA database. See the following categories for more information :

Then, the main pipeline extracts various anatomical objects (hemispheres, grey matter, white matter, cortical sulci...). The first step of this pipeline requires to manually specify to BrainVISA the image orientation (axial, coronal, sagittal...). If you have spatially normalized your data with SPM or MRItotal, you will just have to specify it (be careful if using SPM2 or older, with conventions for left and right...). Otherwise, you may let BrainVisa use SPM or FSL to perform normalization, or you may help brainVISA to virtually normalize your data, clicking on anterior and posterior commissures. All this is done in the process:

Some of the components can be individually triggered in expert mode and may overcome problems occuring with the default pipeline parameters settings. The organization of these new components is compatible with the older (2015, 2013, 2012, 2011, 2007, 2004) pipelines. However since the 2012 version of the pipeline, obsolete variants of components have been removed. However they can still be found in the older versions of the pipelines, still present in "Segmentation pipeline/Older pipelines". This means that individual components can be used to replace one old component, using the validation flags to control the pipeline behaviour. In t the 2013 version of Morphologist, all steps have been reorganized for more efficient distributed execution: all per-hemisphere processing can be done in parallel. Almost all steps of the Morphologist pipeline have been notably improved in the 2012 version. In 2013, mainly the meshes generation have undergone significant improvements: the pipeline produces more accurate, less decimated meshes for both grew/CSF and grey/white meshes.

Another noticeable change is the data organization: there is now a newer ontology, named "brainvisa-3.2.0", which will replace the older "brainvisa-3.1.0". Note that it is entirely compatible with the former one: files are placed at the same locations, but interpretation changes. Namely we replaced the "protocol" attribute with "center" which better suits user needs and understandings. We encorage users to move to the new ontology since the older may not be entirely maintained in the future: new data types may not be referenced in the older ontology.

T1-weighted data are stored in a directory database/center/subject/t1mri. Database, center and subject directories names are choosen by the user but t1mri is a fixed name.

Referentials and transformations for the data are stored in database/center/subject/registration.